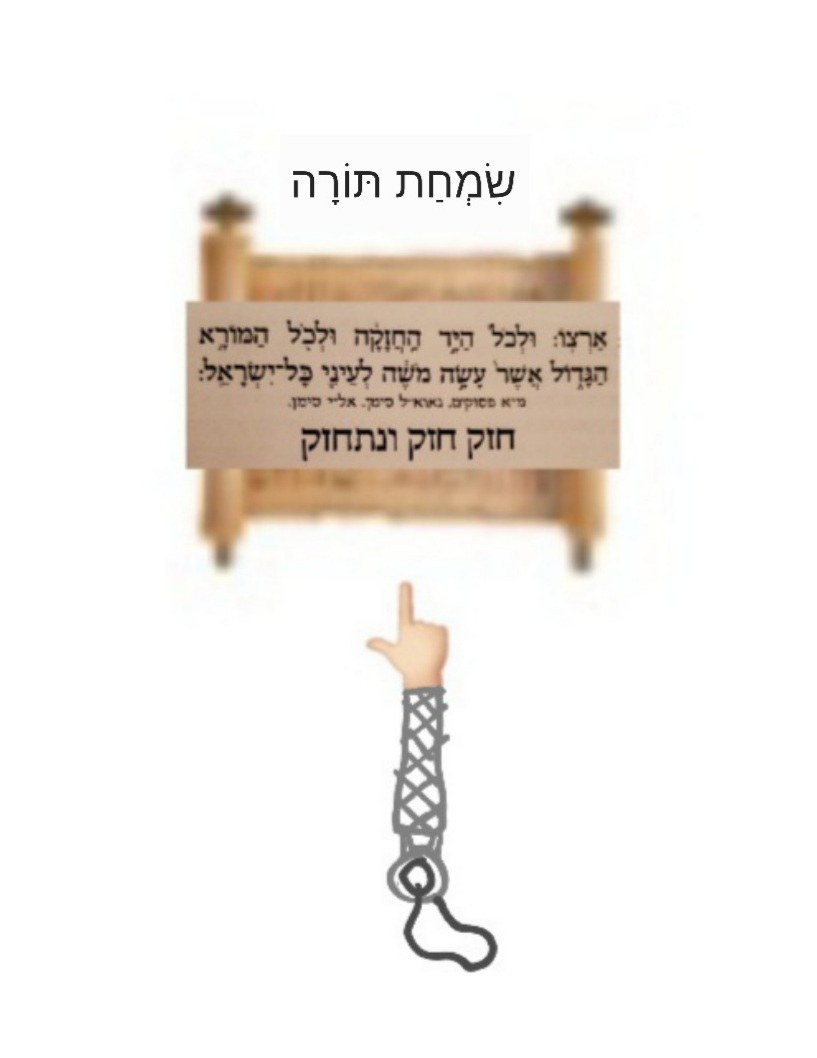 The first such celebration, we know to be Shavuos. According to Chazal, the day which the Torah highlights as the holiday of wheat harvest is also the anniversary of Kabbalas HaTorah, our acceptance of the Torah. Although Biblically speaking, this significant historical factor is not evident from the basic practices of Shavuos, this tradition has shaped our contemporary observance of Shavuos into what it has become, an all-nighter of Torah learning culminating into the public re-reading of the scene of Kabbalas HaTorah. Thus, in our liturgy, Shavuos is referred to as “Z’man Matan Toraseinu”-“The Time of the Presenting of our Torah.”

All of the above might make one wonder why the Krias HaTorah cycle was set so that Simchas Torah be celebrated on Sh’mini Atzeres on not on Shavuos. Why, in fact, are there two “Torah celebrations” on our calendar?

We would reasonably assume that there is likely a simple method behind the arrangement of the Torah reading cycle. There may be numerous reasons for the current arrangement. But, we don’t have to read too much into the holidays to appreciate that there are two different matters being celebrated on Shavuos and on Simchas Torah. The former marks the anniversary of our initial commitment to the Torah whereas the latter is an extra glorified Siyum or celebration of our completion of the communal reading of Torah text. Maybe the two days could have been merged, but, at the end of the day, they weren’t and maybe that’s okay. They don’t have to be a single holiday; considering that technically speaking, there are two different Torah festivities to be appreciated, there is no reason to force the two together. The fact that the Sages of various generations ordained that we celebrate “Torah” on these two separate days, at first glance, appears to be a merely incidental. The two days, for all intents and purposes, seem not to have anything to do with each other.

But, at this time, we are going to take a second glance, and as we do so, we will explore another possibility. Might there actually be a relationship between Simchas Torah and Shavuos?

If we review these two holidays in their contemporary forms, we will notice many intriguing parallels between them.

This much, we’ve explained. But that Torah is “celebrated” on these days is only the beginning of many fascinating parallels.

Both holidays actually are the culmination of “cycles of seven.” Shavuos is anticipated in the form of a seven week countdown (or more accurately, a count-up). The very name Shavuos, “weeks,” highlights this fundamental theme of the day.

Simchas Torah, as it occurs on Sh’mini Atzeres, as well is observed at the end of a period of seven, in this case, seven days. Moreover, the holiday is celebrated in the form of seven Hakafos or “circuits” of marching around the Torah, obviously patterned after the seven similar circuits that took place throughout Succos and on Hoshana Rabbah in the ritual known as Hoshanos.

The two holidays share a title of “Atzeres” (lit., “restraint”) as, on the one hand, Shavuos is referred to throughout the writings of Chazal with this very title, and once again, Simchas Torah always coincides with the Biblical holiday of Sh’mini Atzeres.

Coming back to the theme of sevens, Kabbalistically speaking, the two holidays share another build-up of sevens in the form of the seven Sefiros (“spheres”) and the seven Ushpizin, or guests.

Shavuos is designated through Sefiras HaOmer (lit., Counting of the Omer), which, according to Kabbalah, is to be accompanied by a meditation which expresses a goal of self-improvement in the traits or attributes which represent the seven Sefiros or “spheres” through which Hashem “manifests” Himself in the world.

These “traits” are actually embodied by the seven Ushpizin or spiritual guests which, according to tradition, are to be invited into the Succah, day by day, each day of Succos, beginning from Avraham Avinu who personifies the first of Sefirah of Chessed and concluding with Dovid HaMelech who personifies the seventh Sefirah of Malchus. These same seven Ushpizin reappear during the seven Hakafos of Simchas Torah, as each Hakafah is accompanied by various verses to be recited, each one with verse corresponding to its respective representative of the Ushpizin.

Indeed, on Pesach, our bread must be eaten in the form of unleavened Matzah. On Succos, we may only eat bread in the Succah. Both the Matzah and Succah are symbols of toned down materialism in favor of simplicity and enhanced spirituality.

Once again, the apparent partnership between the holidays of Pesach and Succos calls for its own discussion. The parallels that they share are numerous. But, what we have said so far should suffice for now. What is important is that Pesach begins the official march toward Kabbalas HaTorah of Shavuos, and the Hakafos around the Sefer Torah during the “Hoshanos” service on Succos curiously paves the way for the similar Hakafos which are the hallmark of Simchas Torah.

Are all of the above coincidences? Considering the apparent Kabbalistic associations and implications, we would like to assume not. There is evidently a link between Shavuos and Simchas Torah. The two Torah celebrations were not simply merged into one day, but like the Biblical pairing of Pesach and Succos (which many argue, should have also been instituted as a single holiday), the two Rabbinic “Torah celebrations” are intentionally observed on opposite ends of the calendar year. What is the nature and meaning of the relationship between Simchas Torah and Shavuos?

Indeed, although the two holidays share many themes, the way in which these shared themes are manifest and celebrated on each day highlight many “opposites” between the them. Now that we have compared the days, let us contrast them.

We already pointed out that the two holidays technically celebrate these two different aspects of Torah. Shavuos was the beginning of our entry into the covenant with Hashem and His Torah. It is the basis for our Torah observance. Today, we celebrate that through intense Talmud Torah or Torah study. Simchas Torah celebrates and is observed in the form of public Torah reading.

In this vein, we will highlight what our liturgy does, that these two holidays appear in different seasons. Shavuos, we pointed out, is the holiday of “Z’man Matan Toraseinu.” The very name Simchas Torah might be influenced by its season, “Z’man Simchaseinu”-“time of our rejoicing.”

● Shavuos vs. Hakafos – Weeks vs. Circuits

Although the holidays share the build-up of sevens, there is a clear difference between those sevens. Shavuos is made up merely of the verbal counting up to seven, whereas Simchas Torah is marked by seven cycles of physical movement, marching around in circles.

● Sefiros vs. Ushpizin – Traits vs. Personas

Although there is plenty of Kabbalistic overlap between the seven Sefiros and the seven Ushpizin who personified them, there is a subtle difference between them. The Sefiros we give attention to in anticipation of Shavuos are traits which we are supposed to work on, whereas the Ushpizin are personas, i.e. the Sefiros incarnate or actualized. Shavuos follows meditation upon the Sefiros, while Simchas Torah follows the invitation of the manifest embodiments of those Sefiros.

● Pesach vs. Succos – Inside-out vs. Outside-in

Though Pesach and Succos share a lot, there is a key difference between the symbols of Matzah and Succah. Although each taper our indulgence in bread and all materialism, Matzah focuses on the bread that enters our bodies, whereas the Succah focuses on the environment that surrounds them. Matzah represents the internal, whereas Succah represents the external. Pesach cleanses us from the inside-out, whereas Succos protects us from the outside-in. This difference is apparently consistent with the difference between the internal meditation and commitment of Shavuos and the manifest, outward celebration of Simchas Torah.

At this point, the association between Shavuos and Simchas Torah is unavoidable. They have much in common, yet they appear to be mirror opposites of one another. The question is how we relate to it. As per what was already highlighted, there may be several correct ways to qualify and interpret the hidden relationship between the two holidays. As deeply as we might delve into the matter, we will likely continue to find more connections, further grounds for discussion, and more immeasurable depth.

But, with all of the above in mind, here is just one perspective through which we can observe these “Torah celebrations.”

As we mentioned, there is fair basis for speculation as to why the Rabbis set up two different “Torah celebrations” between Shavuos and Simchas Torah, and similarly, why the Torah ordained two separate holidays to remember and relive the Exodus between Pesach and Succos. But, a lot can happen within a period of six months. In fact, historically speaking, a lot did happen in the Biblical time-line between the period of Pesach and Succos.

On Pesach, Hashem extracted us from slavery and idolatry and granted us the opportunity to become His people on Shavuos. Though we initially seized that opportunity, we also soiled it only forty days after on Shivah Asar B’Tamuz when we regressed and became culpable for the worship of the Golden Calf, effectively cheating on Hashem.

Only after the period of the Aseres Yimei Teshuvah (Ten Days of Repentance) when we were forgiven on Yom Kippur were we reunited in our marriage with Hashem. It was the very next morning that we were authorized to build a Mishkan to reinstate Hashem’s Presence among us, the very same day on which we now begin constructing our Succos.

Although our Succos particularly commemorate the Clouds of Glory which protected us on our way out of Egypt, the Vilna Ga’on points out that it is the return of those clouds that we celebrate on Succos, because indeed, after the Cheit HaEigel, the clouds had departed and were only restored on the day of Succos.

Thus, Succos is a time of restoration of what we lost from the seven week build-up from between Pesach and Shavuos. What we lost in time, we make up for in space. What we lost in meditation, we make up with outward, physical motion. And that which Yom Kippur had restored for us internally, we now protect externally with not only the walls of Mishkan and Succos, but now, with Hakafos as we circle the area repeatedly.

And if we follow the variables all the way through, we will notice that Yom Kippur was the day on which we received the Luchos anew, as the original Tablets of the Covenant where shattered in response to the Cheit HaEigel. The Mishkan was actually designed to house the new Luchos. But since Yom Kippur is overwhelmed by Repentance, this aspect of Simchah which otherwise befits the day was somewhat curved. That said, perhaps a new “Torah celebration” was warranted to celebrate the Luchos Shniyos. The timing Simchas Torah could not be more impeccable.

On Shavuos, we pledged to commit ourselves to the Torah. But, on Simchas Torah, we devote all of our physical and emotional energy to reinforce and embrace that commitment. We externally rejoice with the Torah. We “complete” the Torah. We dance with the Simchah that befits a new and improved relationship with Hashem and His Torah.

May we all be Zocheh to experience and express the true Simchah of life re-dedicated to Torah and Hashem should dance with us and ultimately restore the Eternal House for His Torah with coming of the Geulah in the times of Moshiach, Bimheirah BiYomeinu! Have a Great Hoshana Rabbah, Shabbos, Sh’mini Atzeres and Simchas Torah!