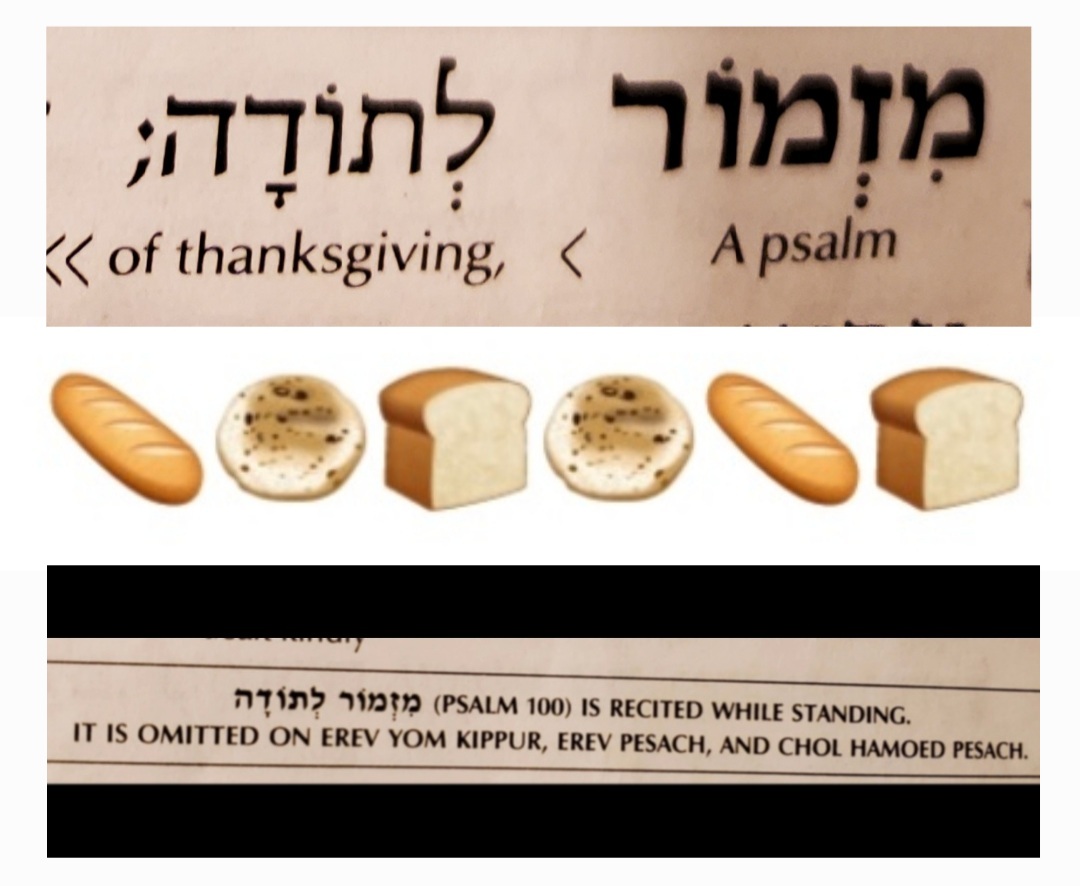 Parshas Tzav elaborates on a Korban that is subject to some interesting irony. That Korban is the Korban Todah, or the Thanksgiving offering.

One of the hallmarks of the Korban Todah is that it is specifically eaten with Chameitz, a departure from the rules of virtually all other Korbanos, regarding which, Parshas Tzav also reminds us, could only be accompanied by Menachos or flour Meal offerings of Matzah.

The irony is that, due to this technicality, the Korban Todah could not be offered on Pesach, a time where our debt of gratitude to Hashem could not be greater. It is for this reason that even on Erev Pesach, the paragraph of Mizmor L’Sodah (which corresponds to the Todah) is omitted.

The question is why Pesach and the Korban of Thanksgiving could not coexist simultaneously. Is gratitude NOT itself a fundamental theme of Pesach?

My brother R’ Daniel suggested an answer that provides us profound insight into the larger role of Pesach. Obviously, Pesach requires our gratitude. In fact, Dayeinu outlines, in detail, each component of the Exodus so that we can properly acknowledge and thank Hashem for each one. But, you’ll also notice that Dayeinu does not end with the Exodus. It only starts there. But, it continues toward an even greater plateau of Mattan Torah and culminates with the building of the Beis HaMikdash. Why does it do that?

The answer is that although every single component of Pesach and the Exodus is singularly sufficient to require our thanks (hence, “Dayeinu”) the larger process of redemption is certainly incomplete without the ends of Mattan Torah and the building of the Beis HaMikdash. While we have to express Hakaras HaTov on Pesach for every goodness Hashem deals us, Hashem is quick to warn us, in a sense, almost as if to say, “Don’t thank Me yet.” Because if Hashem would merely release us from prison, but we would choose to use our “liberation” to revert to lives of spiritual delinquency and other spiritually unhealthy “addictions,” though the thanks are in order, the point of our freedom could be instantly defeated.

In this vein, my brother R’ Daniel explained that although, of course, we should thank Hashem with every line of Dayeinu, Pesach cannot be seen as an end in and of itself. Pesach cannot just be about the Exodus “from,” but it must be about the Exodus “to” and “toward” that final destination. That’s why, in Ha Lachma Anya, we announce that although “Hashata Hacha”-“now we are here,” we have our eyes on the future redemption when, “L’Shanah HaBa’ah B’Ara D’Yisrael”-“in the coming year, (we will be) in the Land of Israel.”

That means that we each have to see Pesach through to the end, accept Hashem’s Torah and build His Beis HaMikdash. Then, when we look back and thank Hashem a second time, it will be with the fuller understanding of the purpose of our Exodus. In that vein, while we thank Hashem now, we should also look forward to the time when we’ll “really thank Him later.”

We should be Zocheh to truly thank Hashem not only for spiritual freedom, but for guiding us towards the final redemption with rebuilding of the Beis HaMikdash, Bimheirah BiYomeinu! Have a GREAT Shabbos HaGADOL & a wonderful Pesach/Chag Kasher V’Samei’ach!