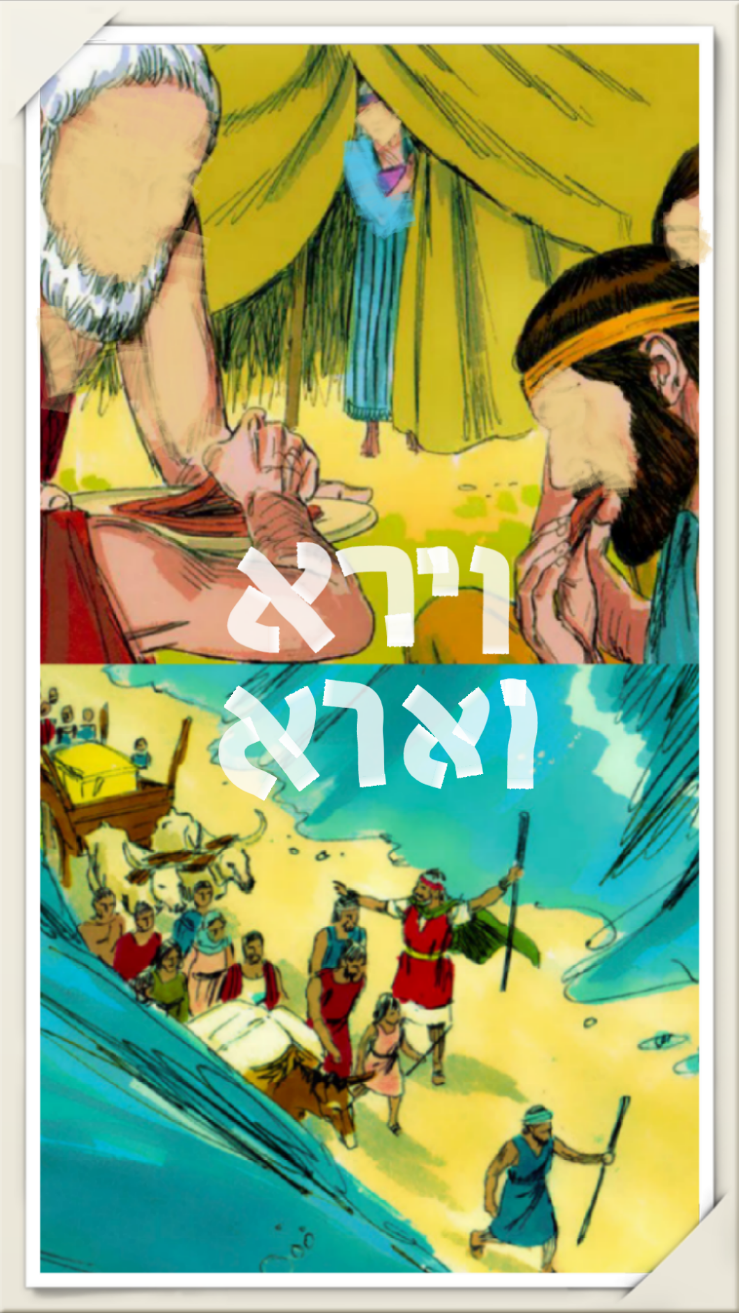 **Note: This D’var Torah is a re-written, much edited, and expanded version of an old one I wrote a few years ago.

● Why does G-d specify that He appeared to the Avos? What does Yitzchak Avinu have to do with Hashem’s message to Moshe? ●

“And I Appeared – The Silver Lining”

The Sidrah opens with G-d’s words of assurance to Moshe Rabbeinu, that although matters look bleak, He had already made a covenant with the Avos—Avraham, Yitzchak and Yaakov—that their offspring would be redeemed and eventually return home to the Promised Land. With that, Hashem would command Moshe to reassure the people and confront Pharaoh once again to carry out the redemption process.
The message is a simple one… or is it?

It is noteworthy, however, in His assurance to Moshe, Hashem specifies, “Va’eira,”1 that He “appeared” to the Avos. Often, the name of a Sidrah is taken for granted and therefore remains unanalyzed. In our case, Parshas Va’eira, can easily be read through without anyone ever simply questioning why, in our particular context, why this expression was necessary. Presumably, the general point that G-d was making here, as was mentioned, was that He had forged a covenant, perhaps a relationship, with the Avos which He intended on maintaining at this time.
Yes, in our Pasuk, G-d also differentiates between His different “Names” and mentions the “Name” with which He had formerly used in the way He related to the Avos.1 Rashi explains that while G-d related to the Avos with His Name “Keil Shakai” (G-d Almighty) which represents the sacred promises He made to them, His Name, “Hashem” [יקוק] (the Tetragramatton), which represents the fulfillment of those promises, He had not actualized in their time. But, whatever G-d’s intended message to Moshe was, it could have likely been conveyed without mentioning this seemingly irrelevant point that G-d had “appeared” to the Avos. Why did G-d need to emphasize this detail, “Va’eira”-“And I appeared [to the forefathers]”?

As it happens, the Ba’al HaTurim did not take this detail for granted. He zeroes in on this word, “Va’eira,” and makes a couple of thought-provoking observations, as always, demonstrated through Remazim. What codes or hints would the Ba’al HaTurim like share with us today?

He points out firstly that the word “Va’eira” [וָאֵרָא] can be read as a compound of “Vav Eira,” the letter “Vav” [ו], having the Gematria or numerical value of “six,” and “Eira,” [אֵרָא] referring to G-d’s act of “appearing.” Accordingly, the word “Va’eira” is an allusion to the six different occasions in which the Torah states that G-d “appeared” to one of the Avos throughout Sefer Bereishis, as the word “Vayeira”-“And He [G-d] appeared” was used three times in regards to Avraham Avinu2, twice for Yitzchak Avinu3, and once for Yaakov Avinu.4
It is definitely an interesting thought which certainly tightens the connection which the Torah already seems to be making between G-d’s covenant with the Avos and G-d’s assurance to Moshe now. Cool.

Even without this fancy Remez, there was already an undoubted emphasis on the Avos in the opening of our Sidrah, but what exactly is the significance of G-d’s “appearing”?
While you’re thinking about that, let us move on to the second Remez of the Ba’al HaTurim.

The Ba’al HaTurim points out further that the letters of the word “Va’eira” share the same Gematria (numerical value) as the name of the second of the Avos, “Yitzchak” [יִצְחָק] (both words equaling 208).
Now, while this calculation may be accurate, the question is what exactly it means. What did the Ba’al HaTurim have in mind? Moreover, what really is the deeper significance of the opening word of this Sidrah, “Va’eira,” both in connection to G-d’s various “appearances” to the Avos, and specifically in connection to Yitzchak Avinu?

As the Ba’al HaTurim has demonstrated, the opening word in our Sidrah serves as a window into the past, that as Hashem was speaking to Moshe, He was harking back to His relationship with the Avos, sort of cuing us to revisit those relationships to better understand Hashem’s message to Moshe. However, before one can explore the textual interplay which our Sidrah may have with other locations in the Torah, one must first grasp, at least, the simple meaning of the content locally, in its own context.

Moshe Rabbeinu vs. the Avos – Tension

As far as our Sidrah is concerned, the Torah was picking up from the end of the previous Sidrah, Shemos, following Moshe’s encounter with G-d in which Moshe had challenged G-d for allowing matters to get worse for the B’nei Yisrael, and in which G-d responded that Moshe would now see the redemption unfold.5 In our Sidrah, as was mentioned, Hashem would assure Moshe that He would maintain His covenant with the Avos.

Now, although the dialogue here may come off as a simple back-and-forth, Chazal have picked up on the underlying tension in the air. For example, where G-d delivers His counter response, “Now, you will see that which I will do to Pharaoh…,”5 Rashi points out6 that Hashem specifically meant to contrast Moshe, who questioned G-d’s justice, from Avraham Avinu, who accepted G-d’s decree without challenging Him, for although G-d first guaranteed Avraham that Yitzchak would be his heir7, Avraham faithfully complied later when G-d commanded him to bring Yitzchak up as an offering.8
The tension would continue as Rashi points out that G-d spoke to Moshe harshly for unjustifiably challenging Him.9 Furthermore, where G-d tells Moshe, “Ani Hashem”-“I am Hashem,” Rashi explains that G-d meant to specify that He is faithful to repay reward where it is due.10 And in fact, G-d was already in midst of exacting that payment, despite what Moshe can tell from his limited view.

With a better understanding of the conversation, we can revisit the larger issues. With Chazal’s sub-textual reading of the conversation, it is clear that they have already begun looking outside the walls of our Sidrah for some insight into this apparently veiled rebuke. The brief references to the Avos in our Sidrah have been received as essential cues and have seemingly directed us back to Sefer Bereishis.

As was mentioned, as per the Ba’al HaTurim, the term “Va’eira” here is connected back to the multiple usages of the related word “Vayeira” in reference to Hashem’s appearing before the Avos. For some reason, Hashem was referencing the appearances He made to the Avos generations prior.
Arguably the most prominent of these “appearances” appears in the Sidrah named after the very word, Parshas Vayeira11, the first encounter between G-d and Avraham after Avraham’s Bris Milah. It was at that fateful milestone in Avraham’s relationship with Hashem where Hashem had changed his name (from “Avram” to “Avraham”) and destiny, promising him a son, to be named Yitzchak, who would continue his legacy.12 According to Chazal, Hashem appeared to Avraham Avinu at Eilonei Mamrei three days removed from his Bris Milah (supposedly the time at which the pain of circumcision reaches its peak).13 It was in this particular scene that G-d sent word to Avraham through an angelic emissary in the guise of a human that in a year’s time, he would have a newborn son to his barren wife.14
What is notable here is what Rashi points out15, that this scene (and likewise, Yitzchak’s birth) would take place on none other than the day of Pesach—indeed, the very day on which we annually celebrate and relive the Exodus and redemption from Egypt, the very redemption which G-d was promising to Moshe in our Sidrah!

With all of the above in mind, it would seem that the Torah and Chazal are using the “appearances” of G-d from Bereishis which are underscored in our Sidrah to draw connections between the Geulah of Yetzias Mitzrayim, our Exodus from Egypt, and the miraculous birth of Yitzchak Avinu. But, how exactly are the two events connected?
In light of the above analysis, perhaps the idea is that both events represent G-d’s miraculous intervention in the lives of His people, with the birth of Yitzchak perhaps being a microcosmic prelude to eventual, national-scale redemption from Egypt. Through both miraculous events, Hashem would perpetuate the growth of the B’nei Yisrael as a nation.

With this perspective of “Va’eira,” the tension between Hashem and Moshe in our Sidrah can be understood in another light. Looking back at when G-d appeared to Avraham and revealed the news that Yitzchak would be born in another year’s time, although Avraham would rejoice and maintain faith in G-d’s justice even when he was later commanded by G-d to sacrifice his son, there was someone who was faulted for failing to display the same optimism and faith. Indeed, the Torah tells us that Sarah Imeinu laughed skeptically upon the simple notion that she could bear a child at this point.16 G-d reported her cynicism to Avraham, and in response to Sarah’s doubt, asserted that nothing is “hidden” from G-d—that He is capable of anything and everything, and indeed, she would bear a son.17 As implied by the Torah, G-d wasn’t pleased with Sarah for her doubts.
It could be said that right here in our Sidrah, Hashem likewise appeared amidst national pain and despair to answer the plaints and the convictions of a skeptical and frustrated hero. Indeed, Both Sarah Imeinu and Moshe Rabbeinu, on some level, struggled with Divine Justice and perceiving any silver lining of hope for a brighter future. Moshe and Sarah are both contrasted from optimistic believers who faithfully awaited this brighter future even when all hope seemed lost.

Interestingly, just as Hashem appeared to Avraham with the positive tidings following his Bris Milah, the scene in our Sidrah appears shortly after Hashem enforced the very same Bris Milah of Avraham Avinu on Moshe’s family.18 It could be that in this light, the Bris Milah was actually a prerequisite for salvation and redemption as it represents ultimate faith in one’s relationship with Hashem, that there’s an eternal bond that won’t ever be abandoned. Indeed, just as Avraham had a Bris before his “Pesach feast,” the Torah states later that the B’nei Yisrael must do the same before theirs.19 Similarly, just as Hashem was sure to answer Avraham and Sarah with whom He was eternally bound, He was no less sure to respond to the plight of the B’nei Yisrael and redeem them from their exile.

In the end, Hashem was orchestrating the redemption process the whole time, but Moshe, at this premature stage, like Sarah, refused to let himself see the silver lining. In the end, just like Avraham and Sarah were ultimately answered in the Pesach, spring season, so would Moshe and the B’nei Yisrael be as promised by Hashem. For both parties, the seemingly barren situations would bear beautiful fruits, for Avraham and Sarah, in the form of their “firstborn” Yitzchak’s birth, and for Moshe and the B’nei Yisrael, in the form of G-d’s firstborn nation’s Exodus and birth from the dark womb of Egypt. The obvious goal for the B’nei Yisrael moving forward would to see G-d’s “appearances” in life, be attuned to the silver lining, and know that not only is G-d capable of bringing redemption, but that He has bound Himself to them through an eternal covenant, one that assures us that, despite what we can tell from our limited sight, the fruit of redemption is on its way.

May we all be Zocheh to have the utmost trust in G-d’s Providence, optimistically see the silver lining in life, faithfully await the Geulah and then, we should be Zocheh to the actualization of that Geulah with the coming of Moshiach, Bimheirah Biyomeinu! Have a Great Shabbos!
-Yehoshua Shmuel Eisenberg 🙂