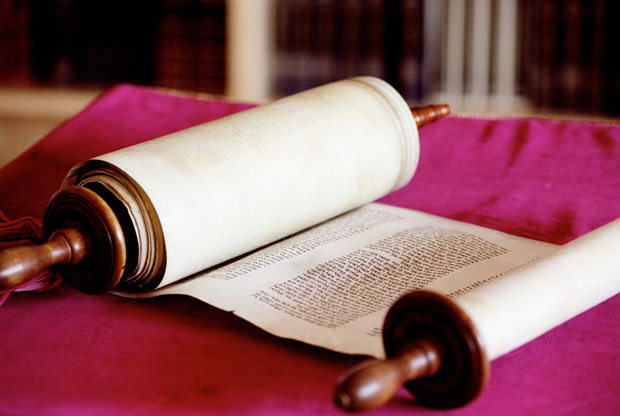 In the very last line of the Torah, in the wake of Moshe’s death, vaguely references his wondrous acts “Asher Asah Moshe L’Einei Kal Yisrael”-“which Moshe had done before the eyes of all of Yisrael” [Devarim 34:12]. This final expression, “L’Einei Kal Yisrael”-“before the eyes of all of Yisrael,” Rashi points out, is not a general description of Moshe’s deeds, but an allusion to a single act of his in particular, particularly, his smashing of the Luchos, the Tablets of the Covenant, in response to Israel’s sin of the Cheit HaEigel, the worshipping of the Golden Calf [Shemos 32:19] (as Moshe Rabbeinu told them [Devarim 9:17], “VaAshabreim L’Eineichem”-“And I shattered them before your eyes”) [based on Sifrei 357, Shabbos 87A].

Indeed, the Torah’s final words understood in this light, we might say, are somber to say the least; certainly not the cause for celebration. However, whenever these words are read publically, they are, in fact, read amidst the merriment of Simchas Torah.

What is Simchas Torah? The Geonim instituted a special holiday to celebrate the completion of the weekly, communal Torah reading, Krias HaTorah, which always coincides today with Sh’mini Atzeres (the eighth day of Succos). It is a day of singing, dancing, and all-around jubilation. In fact, as a result of the merriment, the Poskim ruled that Birchas Kohanim (the Kohanim’s blessing of the congregation), which normally takes place during the Mussaf prayer, be moved earlier to Shacharis due to the concern that prior to Mussaf, the Kohanim might’ve become intoxicated amidst celebrating, at which point, it would be prohibited for them to bless the people.

With all of that said, the apparent “intoxication” of Simchas Torah seems to run awkwardly contrary to the sobering meaning of the words that we’re actually reading. The Torah closes with a reminder of our lowest and most humiliating situation, the fallout of the Cheit HaEigel, where we turned our backs on Hashem and His Torah. It is with this image expressed—whether we’re thinking about it at the time or not—that we proceed, ironically, to celebrate the completion of the Torah… indeed, the same Torah which had to be shattered.

It could be that we’re just nitpicking and splitting hairs here. After all, it’s not the shattering of the Luchos that we’re celebrating on Simchas Torah, but the completion of the weekly Torah reading. It just so happens to be that the final words of the Torah, according to Chazzal, happen to allude to something more seemingly negative and less celebratory. But, we’re not celebrating that unpleasant detail, just the general accomplishment of Krias HaTorah. It’s a Siyum, a celebration of completing a book of Torah.

So, yes, it should be obvious that we’re not celebrating the shattering of the Luchos. And certainly, the Simchah of a Siyum on the Chamishah Chumshei Torah (Five Books of the Torah) is a Simchah worth having a celebrating. Nonetheless, the irony we’ve pointed out is still glaring for a person who is truly thinking about the meaning of the words he is reading (which is what we’re supposed to be doing when we read and learn the Torah).

Not to take away from the Simchah of a Siyum on Torah, but what if Simchas Torah is celebrating something more than the completion of Krias HaTorah? So, what would that be, and how would it answer our challenge?
Well, we argued that the damper to our celebration and rain on our Simchas Torah parade would be the memory of the Cheit HaEigel and the shattering of the Luchos. Can we really celebrate with that uncomfortable imagery in our minds? Well, maybe, if we consider that fateful event in a different light. How else can we look at the shattering of the Luchos?
To answer that question, let’s consider that event in terms of its place on the Jewish calendar and in Jewish history. The Luchos were shattered on Shiva Asar B’Tamuz, which historically and in terms of the calendar, is forty days after Shavuos.

Indeed, Shavuos was the first celebration of Torah, the day when, Chazzal tell us, we committed to keeping Hashem’s Torah, the day when Hashem revealed Himself to us on Har Sinai and declared the Aseres HaDibros (‘Ten Commandments’; the Decalogue). However, when Moshe actually came back with the Luchos, he found us dancing and celebrating around the Golden Calf. It wasn’t until we’ve gone through a process of Teshuvah—repentance, self-improvement, and cleansing on Yom Kippur that Hashem forgave us for that egregious sin and ultimately presented us the Luchos and Torah anew.

But Yom Kippur was not entirely a day a celebration as Shavuos was. Shavuos is a day of feasting while Yom Kippur, on the opposite extreme, is a day of fasting. Yes, there is a sense of happiness to Yom Kippur, however, it is a curbed celebration due to the fact that we’re supposed to feel regret for our sins and overwhelming awe as the Books of Life and Death—our reckoning—is open widely before us. Thus, on Yom Kippur, we do not outwardly celebrate the same way as much as we reflect and genuinely think about our priorities in life, our past, and the relationship that we want to have with Hashem and His Torah in our future.

What happens next? If one looks back in Sefer Shemos, right after Parshas Ki Sisa (the Sidrah in which the Cheit HaEigel was committed), comes Parshas Vayak’heil which teaches of the construction of the Mishkan (Tabernacle) which took place on the day after Yom Kippur. Rashi and the Ramban comment that once Klal Yisrael was given the new Luchos and was forgiven, they became worthy of fulfilling the command of building the Mishkan to house the new Luchos and Hashem’s Presence which could dwell among them once again.

In a similar vein, today, the day after Yom Kippur, the B’nei Yisrael have the custom of starting the construction of their Succos (booths), which similarly to a Beis Midrash, is a Mikdash M’at (Mini Temple), a house for the Torah.

It is with this renewed relationship that we come to the completion of Krias HaTorah. It is with these new Luchos which we receive annually, so-to-speak, that we remember Moshe’s shattering of the old ones in response to the sins of our past. With the complete Torah before us, how can we not celebrate at the memory of the shattered Luchos of old when we consider how far we’ve come and how much we’ve improved?

This discussion started with a comment in Rashi which explains that the Torah’s final words are an allusion to Moshe’s shattering of the Luchos. In the same comment, Rashi points out further that not only did Hashem not get mad at Moshe for his actions, but He wished Moshe a “Yasher Koach” (congratulations; lit., “May your strength be firm”) for doing so.

On Simchas Torah, we have to consider why it was that Moshe’s act was so greatly received by Hashem. And if we’re thinking about it, the answer should be obvious. It was because we not only violated the Torah we were about to receive, but we celebrated amidst our sin. We celebrated a celebration that was completely divorced from Torah. We demonstrated that were not ready to celebrate with the Torah. But, when Moshe Rabbeinu made this clear and shattered the Luchos before our eyes, he set the stage for our Teshuvah process which would allow us to start again. That is what we are celebrating on Simchas Torah! That is really what we’re celebrating during all Siyumim! It is not about the mere completion of the Torah, but the “Hadran,” that “we will return,” come back, start all over again, and re-accept the Torah with new eyes, a new understanding, and a renewed relationship with Hashem.

In the end, when evoking the memory of the shattering of the Luchos, the appropriate response would be to break down into tears. Of course though, there might be multiple reasons for those tears. If we could cry for the broken Luchos, that would be incredible level. But perhaps the deeper level and the level that we aim for on Simchas Torah is to break into tears of hope, joy, and heartfelt celebration over the completion and renewal of the Torah as well as our return to Hashem.

May we all be Zocheh to experience and rejoice with the true completion of Torah and the renewal of our relationship with Hashem, thereby grow ever closer to Hashem, and Hashem shall bring His Presence close to us with the coming of the Geulah, in the days of Moshiach, Bimheirah Biyomeinu! Chazak! Chazak! V’Nis’chazeik! Have a Great Yom Tov/Chag Samei’ach!
-Josh, Yehoshua Shmuel Eisenberg 🙂