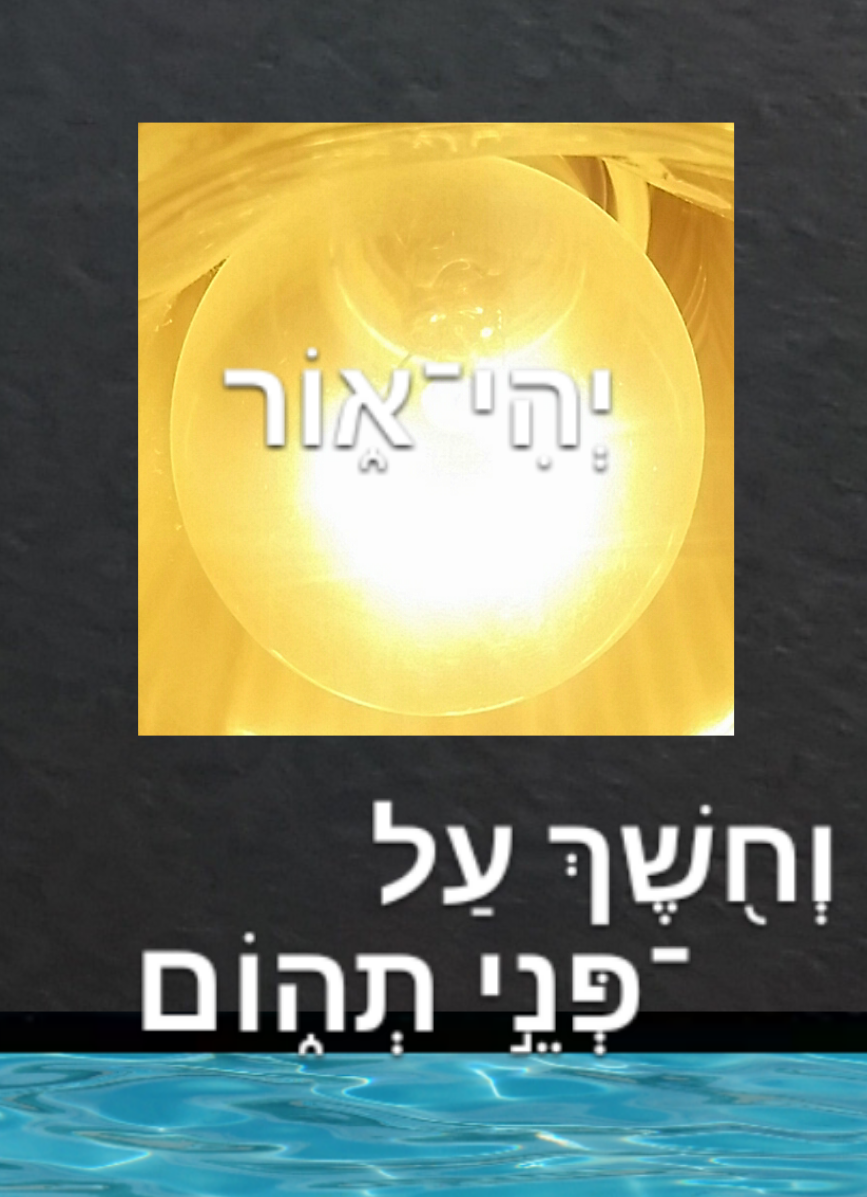 ● Was Darkness created or is Darkness the mere absence of Light? ●

“The Lost Creation of Darkness”

However, the Navi and Chazal indicate that, apparently, the opposite is true, that darkness was too its own creation.

“Who forms Light and Creates Darkness…”

In the Navi, Yishaiyah praises Hashem as, “Yotzeir Or U’Vorei Choshech…”-“He Who forms light and creates darkness…,”1 suggesting that Hashem not only actively created light, but that even the “void of light,” darkness itself, He created and continues to create. It is in this vein that Chazal teach us that in fact, darkness was one of ten things that Hashem created on Day One of Creation.2

The above position, however, seems to contradict the Creation narrative as it is presented plainly in the Torah, for in the Torah, the description of Day One appears to present darkness as though it hat always existed, as the verse states: “V’Choshech Al P’nei Sehom”-“and darkness was on the face of the deep.”3 According to the Torah, it seems that darkness is, as we’ve described, the mere lack of light.

Before we elaborate on our challenge any further, we must point out that even from the simplest read of the Chumash, the narrative is not clear as the verses in Bereishis are laden with ambiguity and packed with secrets so indecipherable to the common mind, many commentators, such as Ramban, urge us not to meditate on them.4 That means that as we look at the Torah and especially the passages devoted to Creation, we have to do so with the humble understanding of our limited intellectual and spiritual scope.

Having said that, the Torah was presented to us and even Creation was described in some form of narrative suggesting that there is something for us to learn from it, albeit superficially. With that, let’s proceed.

“Let There Be Light!”

We argued that from simplest reading of the “narrative” of Bereishis, darkness existed without a formal creation, as though it had been there all along. And from the looks of this same narrative, it would seem that the featured creation of Day One was that of “Light.” Indeed, we’re all familiar with the famous utterance, “Yehi Or”-“Let there be light.”5

Thus, if Choshech, or darkness, is just the fancy name the Torah had used to describe the reality of “no light,” that would make sense. It is not even theologically challenging to suggest that darkness always existed, because the lack of light would logically have been there so long as there was no light. Darkness is not a description of what is there, but of what is not.

But again, the Navi and Chazal seem to be telling us otherwise, that in fact, darkness is a force and substance in its own right which was created on Day One. And if the tradition is correct, that darkness too was created on Day One, the question is why the Pesukim which describe Creation itself do not seem to reflect that. Why, for example, did the Creation narrative not feature a parallel statement, “Let there be darkness”?

Light vs. Darkness in Bereishis

Even if Chazal didn’t indicate it themselves, we would have to admit that the “Light” and “Darkness” of Creation could not refer to light and darkness as we know them today. The luminaries were not placed into the universe until Day Four, and as such these concepts “Or” and “Choshech” necessarily have deeper implications than mere light and darkness.

In that light (no pun intended), Chazal teach us that the Light of Bereishis is actually some form of goodness that needed to be stored away for the righteous.6

Thus, the dichotomy or “separation” of Light and Darkness that is described in the Chumash is apparently associated with the eternal divide between the righteous and wicked. What that means is that, apparently, built into Creation is the apparent dichotomy between two spiritual extremities which constantly battle within man, the forces of good and evil, classically known as the Yeitzer HaTov, the personified Good Inclination which guides one towards the pleasure of the stored light, and the Yeitzer HaRa, the personified Evil Inclination who attempts to mislead him.

If all of the above is true, what is it about “Light” of Creation and the force of “good” that their creation is discussed in detail as opposed to that of the apparent pairing of “darkness” and the force of “evil”?

The Age of Evil

Now, although G-d created many complex components to the human mind and soul, the Evil Inclination in man appears to be man’s most inevitable, innate facet. As Hashem would point out after the Flood, “…Ki Yeizter Leiv HaAdam Ra MiNe’urav…”-“…for the inclination of the heart of mankind is evil from its youth…”7

Now, why is it that man’s inclination is evil “from his youth”? Is it possible that “evil” is really the lack of “good”? On the one hand, we might suggest that a person can be conditioned and taught to actively be evil. But, on the other hand, is that really necessary? The fact that children are born selfish and require our education and guidance from a tender age indicates that without character refinement and without being taught to be “good,” they will ultimately grow up to be evil.

But, if all of the above is true, what emerges is that evil is just the result of the lack of good. In that vein then, it would seem that darkness really just is the lack of light. But, of course, if that is true, we end up back at square one. Did Hashem create darkness or was it always there?

The Mashal of the Marble

Perhaps, we can suggest that both realities are true without contradiction. Indeed, darkness is, on a simple level, a lack of light. But, at the same time, it was also its own creation on Day One. And this phenomenon can be understood through the following Mashal of a sculptor’s marble.

Of course, a sculptor does not begin with a sculpture, but with a giant mass of marble. In order to get to the masterpiece that is his sculpture, he has to carve it out of that mass and remove what does not belong. That which he wants is “good” and that which he does not is “bad.”

In the same exact vein, Hashem created a “marble” mass, which on the surface, appeared as complete darkness, indeed, its own creation. But, beneath this mass, was a masterpiece waiting to emerge, a “Light” which would pierce through the mass upon G-d’s declaration, “Let there be Light!” Thus, the potential for both darkness and light existed in G-d’s “marble.” However, only “Choshech” was apparent on the surface—“Al P’nei Sehom.”

The development of a human from evil to good works in the same way. The human soul is created as an undeveloped and unrefined mass of traits with the potential for both good and evil. But, like the sculpture, good as to be carved out of that mass, and that which is evil must be removed. Left to grow up undeveloped, a human’s innocent, natural selfishness will mature into pure evil. The good can only emerge with effortful development.

That is what the Torah is teaching us in its description of the creation of light. It takes work and effort to refine one’s inclination toward good and fight off the bad, and thus separate between the two. G-d’s own “efforts” are emphasized to set the marker for man, to depict for man where his efforts are required. “Choshech” is a natural force which requires no effort to see in the “marble.” It is what the “marble” looks like without being touched, the unrefined mass. The “Or” needs to be carved out.

The fact that extra effort is required to produce the light is implied by the very Pasuk in Yishaiyah; “Yotzeir Or U’Vorei Choshech…” Indeed, the words “Yotzeir Or” mean that G-d specifically forms or molds the light, like a potter or sculptor—purposefully, with a particular design in mind. On the other hand, “U’Vorei Choshech” means that G-d plainly created it, an undeveloped mass, lacking nuance and definition. It is the excess of the “sculpture” which does not belong.

Indeed, following one’s animalistic instincts requires little intent and effort. They are inborn and automatic. But as Creation highlights, the heart of man’s “formation” process resides in that of the Light, where only mindful and active effort will bear fulfillment. Stressing the focus of man’s personal Avodah, the Torah sidelines the darkness and saves the discussion for Day One’s flagship creation, the effortful formation of Light.

May we all be Zocheh to refine our characters and earn Hashem’s stored Light of Creation with the coming of the Geulah and the days of Moshiach, Bimheirah Biyomeinu!