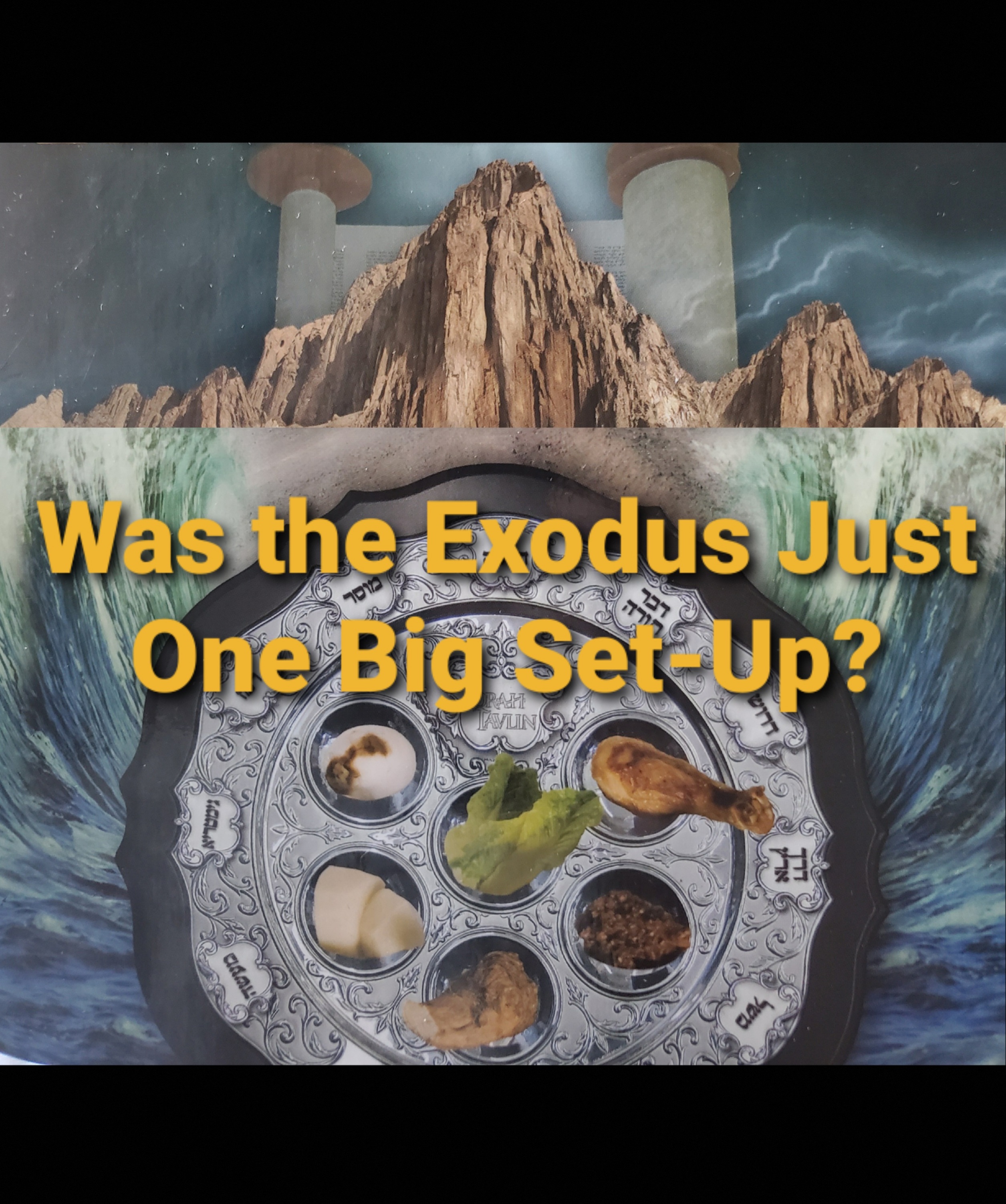 The following D’var Torah was featured in my Parsha Panorama series on my Torah podcast channel, The DataBeis.

To join The DataBeis WhatsApp group to receive schedule updates and links for all of my audio Torah content (or to sponsor), please reach out to me at TheDataBeis@gmail.com.

“Was the Exodus Just One Big Set-Up?”

Sefer Shemos is known in our tradition as the Sefer HaGeulah, the Book of Redemption or “Exodus” as it is commonly called. Indeed, these labels are reasonable as Shemos revolves around the story of Yetzias Mitzrayim, the Exodus from Egypt.

But, what is also true is that Shemos begins with the story of our Galus, an Egyptian Exile. In fact, it is for this reason that Ramban actually refers to Shemos as the Sefer HaGalus V’HaGeulah or the Book of (both) Exile and Redemption.

Indeed, if we are being honest, the reality of exile and suffering is hard to ignore. Although we may be desensitized to the story by now, the subjugation and affliction which the B’nei Yisrael suffered at the hands of Pharaoh can hardly be described or imagined. The people weren’t just whipped. Their babies were literally thrown into the sea alive.

Now, although we should rightfully thank Hashem as we do each Pesach for redeeming us from bondage, we have to wonder why the Galus had to happen. Even if the nature of the exile we suffered was carried out and designed by natural means albeit by evil humans, Hashem did choose to plant us in exile.

Was the Exodus a Set-up?

Accordingly, we should wonder: Was the “Exodus” just one big set-up? Indeed, it seems that our relationship with Hashem today is premised on the Exodus. The Exodus taught us that we are forever dependent on Hashem Who is All-powerful. Because of the Exodus, we are His people, forever bound by His Torah. Yes, Hashem rescued us, but then again, didn’t He also plotted out our subjugation back at the Bris Bein HaBisarim?

If true, Hashem was not only our Rescuer, but He was apparently the Mastermind behind our suffering too, which seems to uncomfortably undercut His credit as our Rescuer. The question is: Does it? We certainly would not be quick to celebrate a person who intentionally puts another person in harm’s way, just to rescue the person later and expect a debt of gratitude, and no less,, a lifetime of religious devotion. So, was Exodus just one big set-up?

The Exodus – A Glorified Slave Trade?

This theological question is one that perhaps you or the “Rasha” at your Seder table has wondered or even voiced on Pesach night. The other popular question is how it is possible to celebrate “Cheirus,” translated commonly as “freedom” or “liberty” when our departure from Egypt came with so many new rules and Halachos which would bind us for life. In this vein, some may argue that the Exodus was a glorified slave trade; we went from being slaves to Pharaoh to being slaves to the religious dictates of Hashem’s Torah. That is the logical end of the Exodus; our lifetime debt to Hashem.

This much, Hashem informed Moshe at the Burning Bush, that we would forever become Hashem’s people and that He would become a G-d to us. And if one is agreeable and steadfastly religious, then this is beautiful. But, suppose one is more skeptical, like the “Rasha” at the table. What does one tell him?

The Flaw in Amram’s Argument

These questions can perhaps be answered by a dispute which our tradition records between none other than Amram, the father of Moshe Rabbeinu, and his daughter Miriam [See Shemos Rabbah 1:17 and Sotah 12A]. Before there even was a Moshe Rabbeinu, Amram had separated with his wife with no intentions of reuniting with her to have anymore children. And his argument for that was a simple one: Why have more children just so they can suffer and be killed? The pain of exile is just not worth it.

A Set-up for What?

The answer to all of our questions relies on the following question. Suppose the Exodus was a set-up. But, what was it a set-up for? What is the true end of this set-up? Does G-d merely have a tyrannical plan of world domination? Did He trap us merely so we could owe Him?

If we believe that Hashem is not merely our King and Creator, but our Father, we can trust that His actions is not self-serving, but solely for us and our good. If a father were to put his child through the struggle of school, it is not to set him up for failure, but because he absolutely wants his child to attain the tools to succeed, even if the child will have to break a sweat to reach the desired destination.

The original design for the Exodus is far more profound than we even have been presenting it thus far. Granted, if we look at the Geulah without the Galus, the Exodus alone without the Exile, we WILL be missing something. Both served a purpose. The Exile itself WAS designed not merely to create our dependence on Hashem, but to awaken us to the eternal dependence that we’ve always had on Hashem. And to what end? Indeed, so that we become Hashem’s people SO THAT we can ourselves merit the ultimate good, the greatest pleasure.

Indeed, the Masters of Kabbalah (Ramchal among them) explained that the whole purpose and need for Creation was so that G-d could bestow the ultimate good. But, by definition, the ultimate good could only be “merited.” Indeed, the same Kabbalists explaim that the whole purpose of “merit” in This World is SO THAT we can earn and appreciate the ultimate pleasure which, again, by definition, must be earned and not merely be handed out. That makes This World a mere hallway, Galus a mere initiation, and Egypt a proving ground for an end so much greater. That end will be the ultimate good. THAT is what the Exodus was a set-up for. If we’re earnestly committed to doing our part in the proving ground, then in the end, it’ll all be worth it.

May we all be Zocheh to appreciate and thrive in our particular role Galus and Olam HaZeh and thereby be Zocheh to Geulah and Olam HaBa as well as the coming of Moshiach, Bimheirah BiYomeinu! Have a Great Shabbos Mevarchim Shevat!
-Yehoshua Shmuel Eisenberg