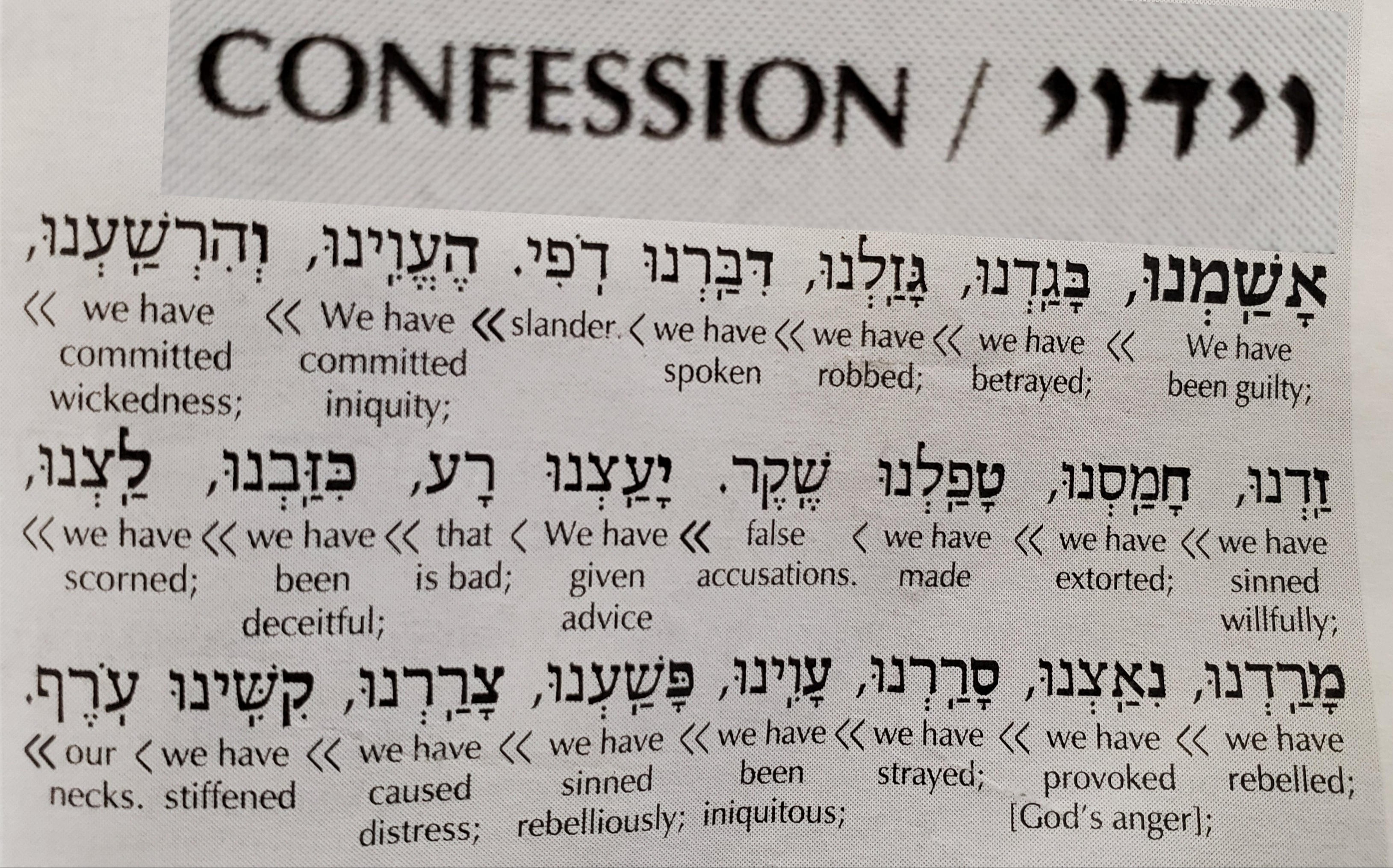 “What is true Viduy?”

There are some Mitzvos that require only action, whereas some require a verbal declaration. Parshas Ki Savo features two Mitzvos which require both, namely Bikurim and Ma’aser. The Mitzvah of Bikurim, the First Fruit that are designated to Hashem, features what is widely referred to by as “Mikra Bikurim” the Declaration of the First Fruit (it is sometimes but far less often referred to as “Viduy Bikurim” or the “Admission of First Fruit”). This declaration is one of thanksgiving, describing Hashem’s providence throughout Israel’s history and even this individual farmer’s journey to this point.

However, Ma’aser, referring to the different tithes to be paid to and consumed by various individuals, features a declaration wholly referred to as “Viduy Ma’aser,”1 literally, an “admission” or “confession” of the Tithes. Through this “Viduy,” the individual must formally declare that he has adhered to all of the rules of Ma’aser, that he allotted or consumed the tithes (depending on the specific tithe) in the appropriate way and treated the products of the tithes as the Torah prescribed.

The label “Mikra Bikurim” is readily easy to understand. It is a recitation or a declaration that accompanies Bikurim. It is self-explanatory. However, the title “Viduy Ma’aser” is an enigma. “Viduy,” as we said, is commonly translated as “confession.” The obvious problem is that the declaration that accompanies Ma’aser hardly sounds like a confession. In fact, it sounds like the opposite of a confession. “Viduy Ma’aser” essentially states that “I did everything correctly,” “I did everything I was supposed to do,” etc. A confession is typically the admission of wrongdoing.

We might add that, if anything, we might argue that the term “Viduy” far more appropriately describes the declaration of Bikurim. That is because the expression “Viduy,” although typically defined as a “confession,” shares a root with the word for thanksgiving, Hoda’ah, which is exactly what Mikra Bikurim is. And yet, the widely accepted term in Chazal is the broader “Mikra Bikurim.”

What then is the meaning of this “Viduy” as it pertains to Ma’aser? Regarding what are we “coming clean”? Where is the confession in “Viduy Ma’aser”?

While we’re on the topic of the mysterious Viduy Ma’aser, let us ponder the concept of Viduy in general. As we’re well into the month of Elul, the preceding days to the Yimei HaDin (Days of Judgment), Viduy is about to become a regular part of our Tefilah. From the beginning of Selichos or the liturgical appeal for forgiveness, until the end of Yom Kippur, we will engage in “Viduy,” confessions of our sins and transgressions.

The question is what the point of Viduy is. Why do we engage in Viduy? To whom are we confessing? Presumably, to G-d. Granted, if we wronged fellowman, we should rightfully confess to that individual. But, the formal Viduy is directed to G-d. If that is the case, then why is Viduy even necessary? He knows everything. We refer to Him in our Yomim Nora’im liturgy as “Zocher Kal HaNishkachos”-“remembering of all that is otherwise forgotten.”2 Hashem knows everything.

The Confession of the Tithe

To what in fact does one confess in Viduy Ma’aser? Bothered by this question, Sforno essentially suggests that the Mitzvah of Ma’aser implicitly confesses to the sin of our ancestors, namely, in the tragedy of the Golden Calf, through which we as a nation were lowered and Levi, as a tribe, was elevated, thus reserving the rights to our tithes. Surely, this would qualify as a confession, however, the difficulty with this suggestion is that the sin of the Golden Calf is only implicit in the Mitzvah at best and is completely absent from the text of Viduy Ma’aser itself. In fact, in the text of Viduy Ma’aser, there is not a single sin to be found.

In explaining the reasoning for the declaration of Viduy Ma’aser, Rashbam explains that Hashem has commanded this “confession” to serve as a deterrent so that a person should not think to withhold from paying his tithes. If he knows that he will have to make a “confession” and rate his own performance before G-d, he will make sure that does everything properly so that he will not have to lie before G-d. In a sense then, perhaps Viduy Ma’aser is meant to be understood as the avoidance to future confessions of wrongdoing. But, then why would we call it a “confession”? Maybe, Viduy means something altogether different. What is the true meaning of Viduy?

The Meaning of Viduy

R’ Yosef Ber Soloveitchik suggested that Viduy Ma’aser is actually the greatest model for confession as true confession means to acknowledge what one can do at his best—that one has the potential to do everything right! In other words, when we have sinned to G-d, the greatest indictment is the fact that we could have and were expected to have been better. We should have acted properly. Viduy Ma’aser declares that we have in fact done everything right, and that that is the “should-be” standard for our every future performance.

And yet, perhaps there is another but related revelation about Viduy that we can derive from the Viduy Ma’aser. Earlier, we were bothered why we need to declare a Viduy in the first place if G-d knows everything. Rashbam had suggested that, in fact, the declaration of Ma’aser is primarily an “incentive” for the individual himself, to assure that in fact he properly fulfills the Mitzvah of Ma’aser. But, perhaps our own “Viduy” before G-d is never quite about confessing before G-d, but that too, is a Viduy for us.

Indeed, G-d knows everything we have done, right and wrong. But, do we? Are we able to honestly assess ourselves and “rate our own performance”? Are we able to face that which we have done and admit it if we have done wrong? That is perhaps the essence of Viduy. When we stand before G-d, we don’t shy away from the things we have done right. We can note our accomplishments from the previous year, but Viduy means to honestly acknowledge the entire picture. Indeed, Viduy does not reveal anything new to G-d. It is honest self-introspection and self-evaluation. In fact, like Hoda’ah or thanksgiving, Viduy is personal acknowledgment of what is already plain and obvious before G-d. Viduy is the state where we remember that we cannot lie to G-d and should therefore not lie to ourselves.

May we all be Zocheh to engage in true and honest Viduy, be honest to G-d and honest to ourselves, reviewing our successes and failures, and Hashem should not only accept our Viduy, but be able to bear testimony to only future successes, worthy of Geulah and the coming of Moshiach, Bimheirah BiYomeinu! Have a Great Shabbos!
-Yehoshua Shmuel Eisenberg ☺