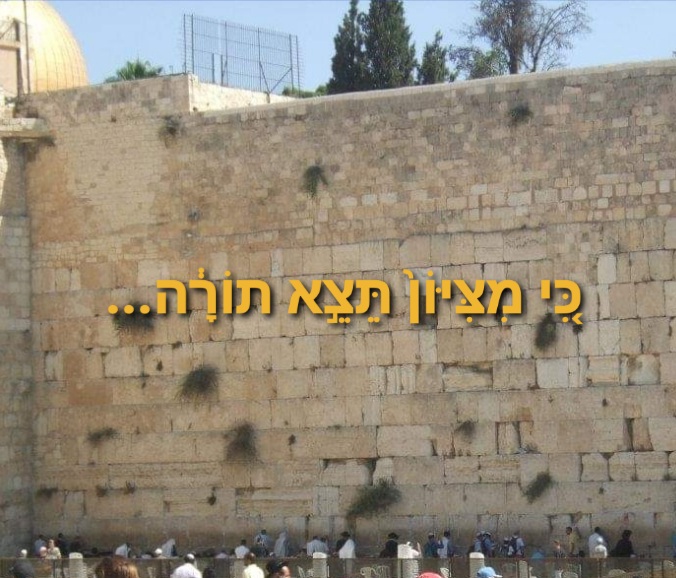 For the my audio content, please visit me at The DataBeis:

“Why Do We Need Yerushalayim?”

Parshas Re’eih centralizes Eretz Yisrael and Yerushalayim with various laws such as:

• The prohibition against offering Korbanos on Bamos (private altars),

• Ma’aser Sheini which must be consumed in Yerushalayim, and

• Aliyah L’Regel, or the three annual pilgrimages to Yerushalayim

Hashem is Here, Hashem is There…

Apparently, there is extra Kedushah in Eretz Yisrael and even more in Yerushalayim. These places are “holier.” Therefore we treat these places differently; our conduct in these places changes. The question is why that is. Is it not the case that “Hashem is here, Hashem is there, Hashem is truly everywhere”–or in more traditional terms “M’Lo Chol HaAretz K’vodo”-“the entire earth is filled with His Glory” [Yishaiyah 6:3]?

If this is true, then why would the Torah limit our sensitivity to Hashem’s Presence to only certain locations? Why should it be forbidden to offer Korbanos in our backyards? If the entire earth belongs to Hashem, why shouldn’t Sh’mitah apply in all lands? Why must we make a special trip to Yerushalayim to eat Ma’aser Sheini and visit Hashem at the Beis HaMikdash on the pilgrimages? Why even is there a Beis HaMikdash?

A similar question may be asked in the realm of time. Just as not all spaces and places have the same degree of holiness, nor does every day and moment. There are times that are holier than others. Shabbos is holier than any weekday. Yom Kippur is perhaps the holiest day of the year. And just as we act differently in holier locations, our conduct is holier on these days.

All in all, we treat these times and spaces differently due to their holiness and apparently higher concentration of Divine Presence. But, why, in fact is there a difference in holiness? Shouldn’t our conduct be holy at all moments and in all places, not just on Yom Kippur and not just in the Mikdash or Shul? Isn’t Hashem ever present and Omnipresent? Isn’t He beyond time and space? Why then does there need to be a “Makom Asher Yivchar,” or a “chosen place”?

We Can’t Handle the Truth

Although, indeed, Hashem exists in all places and times, from where we stand in this physical world right now, we can hardly handle that reality. Yes, we should act appropriately in all settings, but if we would treat everywhere as though it were a Shul or the Beis HaMikdash, we would cease to treat any places that way. In a certain sense, if He is everywhere, He is no where. Granted, in reality, Hashem IS everywhere, but if we would lack these “holier spaces,” we wouldn’t be able to be as conscious of Divine Presence.

In the same sense, although we yearn for the “Yom SheKulo Shabbos” or the day when it will be entirely Shabbos, all day and everyday, our mortal wellbeings simply cannot handle that now. We should aspire to be able to handle such a way of life, but right now, we couldn’t function or survive if we tried to live Yom Kippur every single day.

Hashem’s “ever-Presence” and Omnipresence is the truth, and we aspire to live by that truth. But, most of the time, we can’t handle that truth.

Hashem obviously knew all of this when He created the world and mankind. He designed everything that way. He created a world in which His Presence could seemingly be limited and eclipsed.

The masters of Kabbalah refer to this reality as Tzitzum, literally constriction. Of course Hashem is Omnipresent, but to truly feel it would be overwhelming for the mortal beings Hashem created us to be. Without “limiting” His Presence, as it were, we wouldn’t have free choice, a key component of Creation. That is why Hashem must allows darkness and evil to exist, why Avodah Zarah could exist in His earth.

But, Hashem did not entirely leave man in the dark without any guiding light.

For all the political overtones the word has taken on, the word “Tziyon” (or Zion) has an actual meaning; it means a looking point, or something you can look at and point to. It is a beacon that shines the way for the world. It is the place from where Torah and the word of Hashem naturally emerges, where Hashem’s Presence must be felt if no where else. There, no Avodah Zarah can exist or be tolerated. There, the world takes a Sabbatical every seven years so that its inhabitants can be fully G-d conscious. Yes, we must aspire to experience Hashem and live His Torah everywhere, but Hashem’s Presence and Torah emanate from Tziyon. They emanate from there, but hopefully will not stop there.

No, it’s not easy to be a “chosen people.” But, it is not easy to experience Hashem and live in His Presence. That’s why we need Yerushalayim, Shabbos, and Yom Kippur. We have reference points in both time and space. We have to our best to become the reference points in “real life,” the human embodiments of Divine Presence and Torah, living Anshei Kodesh and B’nei Torah.

We should all be Zocheh to be inspired by Hashem’s looking points, serve as the beacons we’re chosen to be, experience the rebuilding of Yerushalayim and the day on which Hashem will be One and His Name One with coming of Moshiach, Bimheirah BiYomeinu! Have a Great Shabbos Mevarchim Elul!