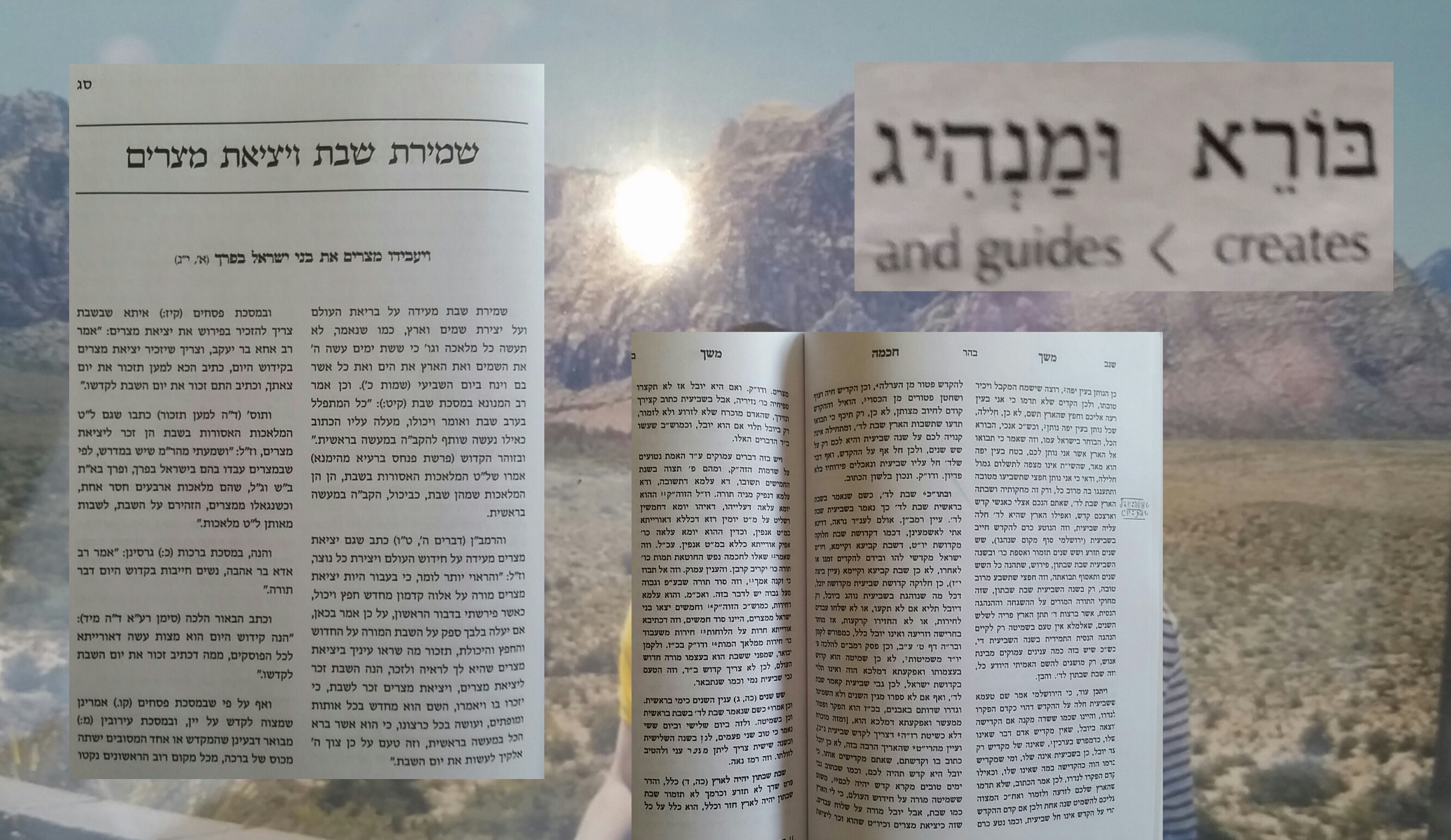 The “Corona-connections” this week are obvious. The mass cessation from work and the return of all people to their homes seems to be a stark parallel of sorts to Shmitah and Yovel. Shmitah, the agricultural Sabbatical year, restricts us from working the land, cancels loans, and tests our trust in Hashem. The fiftieth year of that cycle, Yovel, which returns all “ancestral lands” to their owners and emancipates slaves, is marked by the call of “D’ror,” rendered by most as “freedom,” or as R’ Hirsch specifies, a “homecoming.”

What is the point of these two periods, Shmitah and Yovel? Very simply, like magnified versions of Shabbos, they are reminders of Hashem’s mastery over this world. More specifically though, Meshech Chochmah writes a brilliant piece suggesting with unmistakable evidence that Sh’mitah corresponds to Shabbos, whereas Yovel corresponds to Yom Tov.

Sh’mitah is called a “Shabbos LaHashem”1 whereas Yovel is referred to as “Kodesh…Lachem”-“Holy…for you”2 a characteristic description of Yom Tov. Like Shabbos, Shmitah occurs automatically at its time, whereas the respective holiness of both Yom Tov and Yovel is contingent upon the designation of the Jewish court. Shmitah stands as a reminder that “Ki Li HaAretz”3—that the world belongs to Hashem, quite reminiscent of Shabbos which primarily commemorates creation of the world. On the other hand, whereas Yovel, which is a preceded by a period of Sefirah or counting, is ushered in by Shofar blasts, and generates the emancipation of Avadim, seems to contain shades of many of our Yomim Tovim.

Certainly, there is overlap between the themes of Shabbos and Yom Tov, and between Shmitah and Yovel as well. The question then is what the fundamental difference is between Shabbos/Shmitah and Yom Tov/Yovel? Why do we require both?

My Rebbi, R’ Yonason Sacks, points out that our text of Kiddush on Shabbos highlights two different aspects of Hashem’s mastery over the world. On the one hand, we refer to Shabbos as a “Zikaron L’Ma’aseih Bereishis”-“A memorial of the Works of Creation,” and on the other hand, we refer to a “Zeicher LiYetzias Mitzrayim”-“a commemoration of the Exodus from Egypt.” We could understand Shabbos’s connection to Bereishis, but what does it have to do with Yetzias Mitzrayim? My Rebbi cites Ramban4, for example, who indicates that Yetzias Mitzrayim was a reaffirmation of Hashem’s mastery over Creation. This component of Shabbos is the hallmark of all of the Yomim Tovim which stem originally from the Exodus.

In this vein, we’ll reiterate that although there is an overlap of themes, Shabbos and Shmitah are primarily a “Zikaron L’Ma’aseih Bereishis,” whereas Yom Tov and Yovel serve as a “Zeicher LiYetzias Mitzrayim.”

We’re almost there, but, what exactly is the difference between these two “Zechiros” of Creation on the one hand and the Exodus on the other? In two words, my Rebbi explains, it is the difference between Hashem’s role as a “Borei” and a “Manhig,” the terms obviously borrowed from the first of the Thirteen Principles of Faith, “Ani Ma’amin.” A “Borei” is a “Creator” while a “Manhig” is a “Leader” and “Guide” or a “Driver” of the world.

On the one hand, Hashem created the world and everything in it. The world is His. We have to have Emunah in Hashem as the “historical” Borei. That is Shabbos. And yet, as demonstrated and reaffirmed by the Exodus, Hashem oversees and still intervenes in the world. He is the Guide. That involvement has to inspire our Bitachon in Hashem as the acting Manhig. That is Yom Tov.

Shmitah literally means to leave alone or abandon. Like Shabbos requires, we regularly put our work aside, because again, the world is Hashem’s and He told us to.

But the meaning of Yovel is more dubious. What does it mean? Moreover, why, in fact, is the period called “Yovel” and not “D’ror,” the term which the Torah uses to describe the actual “freedom” of “homecoming”?

As for the meaning of the word, Rashi explains that it is a reference to the Shofar or ram’s horn which, indeed, was referred to at the scene of Kabbalas HaTorah as “HaYovel.”5

Ramban, however, based on many verses in Tanach, explains that the word has connotations of leading ahead, or facilitating movement by conducting or goading. For example, “Yevulah” refers to the yield or produce which the land brings forth.  Even here, we find potential association with a ram as the word “Yuval” is the word used to describe a flock being led somewhere (“LaTevach Yuval”-“led to slaughter”6).

If that is the case, then during Yovel, who is being led where? People are being led home; slaves are returning to their families, and those who sold their ancestral lands are returning to their homes. But, do you know who else is “led home” in the Yovel year? Even the slave-owners and those who have purchased land which they thought they could call their own. They too are led back to the home state of reality. And who is leading them there? The Manhig of the world, of course, to remind them what they think is theirs, is His.

Whether one prefers Rashi’s interpretation or Ramban’s read, Yovel refers to the overall facilitation of this “release” and “homecoming.” It could be the call of the Shofar or it could be the divine implementation of this yielding and of itself. Either way, Yovel is the voice and machination behind the D’ror that follows. Yovel tells us to look at the Facilitator of the D’ror! Thus, “Yovel” is not just an expression of recognition that Hashem once created the world, but that He is an involved Administrator, communicating with us.

The Shofar blasts or the periodic Yomim Tovim remind us what we should already know, that Hashem runs the world. They remind that nothing we own is ours to keep, but it is all His, and that we must not just put our things aside temporarily like Shmitah demands, but every now and then, we must permanently break away with our assets and completely yield to Him everything that He has not “personally” given us. While Shmitah says to leave it alone, but Yovel demands that we completely let go.

We need recognition of Hashem as both the Borei and the Manhig, because without the periodic wake-up call and reset button of Yovel, we become lulled into this false sense of “Yes, Hashem is Creator, but really, these things are mine”—the same mentality we have when we “sell” our Chameitz which G-d knows we have not truly relinquished. Let go of it! Though we have all been able to engage in miniature forms of temporary Shmitah, sometimes, Hashem has to change our lives permanently with an alarming Yovel experience to really get our attention. Sometimes, He has to take everything away from us. That wake-up call can manifest in the form of a Shofar-blast. It could present itself in the form of the Tochachah when we are stubbornly rebellious against Hashem. Or perhaps, it could be taking place right here and right now in the form of a global pandemic.

At the end of the day, nothing we have is ours; accordingly, we have to yield to the Owner. The Avodah of the Yovel experience is not to fight Hashem’s Ratzon, but on the contrary, “Im B’Chukosai Teileichu” clearly instructs us to follow the Manhig.

May we all be Zocheh to follow our Manhig back to our ancestral home with the coming of the Geulah and the arrival of Moshiach, Bimheirah Biyomeinu! Have a Great Shabbos! Don’t forget to count Sefiras HaOmer (#37).
-Yehoshua Shmuel Eisenberg 🙂