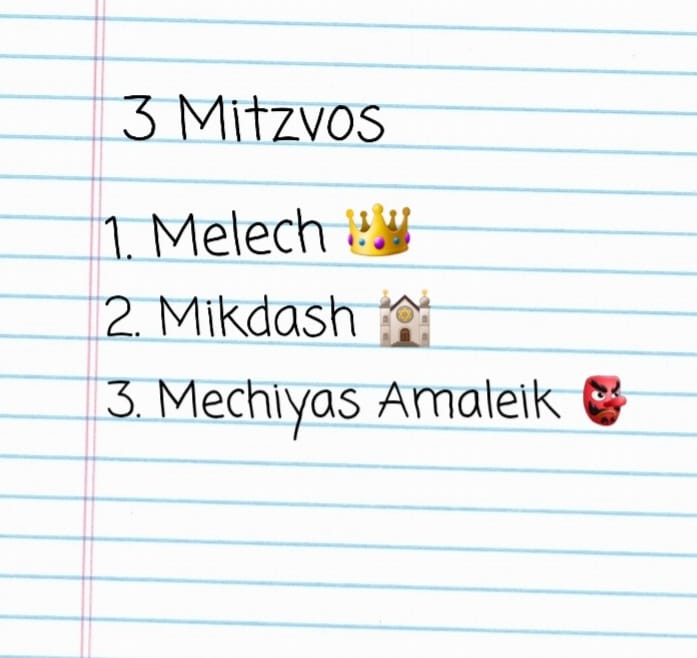 For an audio version, open the link below:
https://jewishpodcasts.fm/thedatabeis/10308

For all of my other audio content, please visit me at The DataBeis:
https://jewishpodcasts.fm/thedatabeis

Chazal [Sanhedrin 20B, Sifrei 67:1] teach us that there are three Mitzvos that we, as a nation, are obligated to perform as soon as we settle in Eretz Yisrael. Two of these Mitzvos happen to appear in our Parshiyos this week, between Terumah and Zachor. On the one hand, Terumah features the first command to build a Mikdash or a Holy Temple and, on the other hand, Zachor features the command to obliterate the seed of Amaleik. The remaining one of the three Mitzvos is to appoint a king.

Do these Mitzvos have anything to do with each other intrinsically or is this series merely coincidental? Appoint the Israelite King, Build the Temple, and wipe out Amaleik. Do they share a common a goal?

At first glance, these all appear to be matters which we yearn for every single day. We pray at least three times daily for both the arrival of the Melech HaMoshiach and the rebuilding of the Beis HaMikdash. Moreover, the Rambam [Melachim 5:5] rules that we have an obligation to constantly recall the deed of Amakeik (not just annually, but daily). Thus, the passage of Parshas Zachor is featured among the Sheish Zechiros which many recite daily.

Is there a reason why we specifically yearn for these things? What are the respective or perhaps common purposes of having an Israelite King, a Holy Temple, and eradicating Amaleik? Are they ends in and of themselves? Are they a means to something greater? Why pray for Moshiach or the rebuilding of a Mikdash? What do we want to accomplish with a king? What will be the immediate benefit of having the Temple? And why remember Amaleik every single day? We don’t even know who Amaleik is.

In fact, Moshiach and the Beis HaMikdash are not ends in and of themselves. They are purely catalysts for strengthening the same Avodas Hashem we’re obligated to engage in every moment of our lives. Both are meant to inspire our healthy and balanced Yirah, or our awe and reverence for Hashem.

The Navi reports multiple times that it was specifically in the absence of the appropriate king that man did only what was correct in his own eyes [Shoftim 17:6, 21:25]. The Torah commands a king write himself a second Sefer Torah specifically so that he could learn (and perhaps master and eventually teach) the sophisticated art of Yiras Hashem [Devarim 17:18-19].

Regarding the Beis HaMikdash, no less, we are commanded “U’Mikdashi Tira’u”-“And My Temple you shall revere” [Vayikra 19:3, 30]. That is apparently the goal of the Mikdash; it’s the place where despite the fact that G-d is everywhere and yet goes unnoticed, when we’re there, we have no choice but to feel His Presence and display Yirah. It is the place that reinstates the Yirah that is the fuel of our Avodas Hashem.

What is Amaleik but the ultimate adversary to this endeavor? Parshas Zachor recalls, not merely how he targeted us when we were most vulnerable, but “V’Lo Yarei Elokim,” [Devarim 25:18] that he did not fear G-d. Amaleik seeks to cast and instill doubt in our hearts, undermining and uprooting the Yirah that belongs there. Amaleik is the force, both internal and external, that seeks to undo everything that the Melech HaMoshiach and the Beis HaMikdash would accomplish for us. As long as any trace of Amaleik remains intact, within us or without, neither the Mikdash nor can Moshiach can fully function and service us. That is where the Mitzvah of Mechiyas Amaleik becomes most essential; whatever it is that is stunting our Yiras Shamayim must be obliterated. Though we publicly read about this spiritual stain twice annually, we have to remember it every day until we’ve permanently blotted it out from underneath the heavens.

May we all be Zocheh to the arrival of the Melech HaMoshiach, the rebuilding of the Beis HaMikdash, the permanent obliteration of Amaleik, the restoration of our Yiras Shamayim, and an eternity of undisturbed Avodas Hashem, the truest Geulah, Bimheirah BiYomeinu! Have a Great Shabbos Zachor/Purim!
-Yehoshua Shmuel Eisenberg